Humans aren’t the only creatures who can claim dogs as their best friend. Many other species also form close bonds with different animals. The sight of these loving animal friendships would melt even the hardest heart, as well as showing that animals can also display so called ‘human’ characteristics such as affection, tolerance, love and compassion. Here are 18 amazing examples of some of these truly inspirational friendships.

1. Anjana the chimpanzee and her tiger cub friends

When the tiger cub enclosure at the Institute of Greatly Endangered and Rare Species (TIGERS) sanctuary in South Carolina was flooded out, Anjana the chimpanzee was only too happy to take the babies under her wing.

Anjana was hand reared by keeper China York, and is only too happy to copy her caring behaviour by helping her raise other animals…even ones that would usually have a chimp like Anjara for dinner!

Since helping bottle feed the cubs, Anjara and her new friends have become inseparable.

This 12 week old macaque monkey was abandoned by its mother. After being rescued on Neilingding Island in Goangdong Province, he was taken to an animal hospital where he struck up a friendship with a stunning white pigeon, a close relationship that helped the monkey get over the loss of his mom.

3. Kate the Great Dane and Pippin the deer

Dogs are usually more at home chasing deer than they are making friends with them, but not Kate! She adopted Pippin when she was abandoned by her mother near Kate’s family home in British Columbia. Pippin has now returned to the wild but still visits Kate regularly.

4. Suryia the orangutan and Roscoe the blue tick hound

Suryia was so depressed after losing his parents that he wouldn’t eat or respond to his rescuers, but after a stray dog called Roscoe followed his handlers back to the animal sanctuary, Suryia immediately went over to give him a hug. They’ve been by each others’ side ever since and Suryia is thriving. 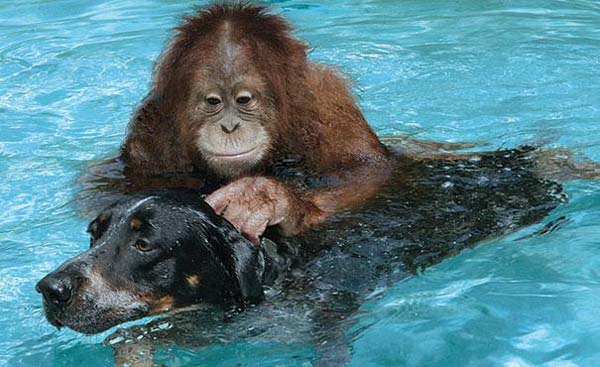 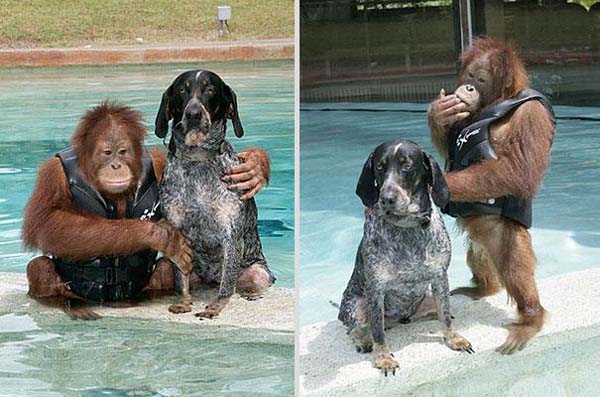 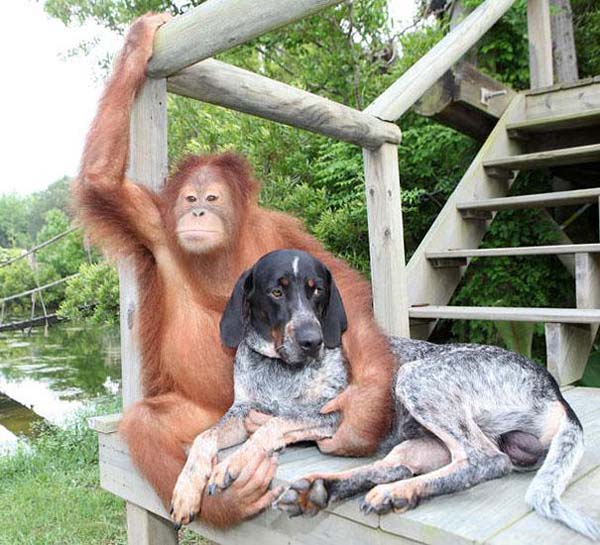 5. Koko the gorilla and her kittens

Koko is a famous female gorilla who knows over 1000 words of sign language and can communicate with her handlers. She has also owned three pet cats during her life. The first- who she named All Ball- escaped from her cage and was sadly killed by a car, but she subsequently adopted and successfully raised two other kittens. 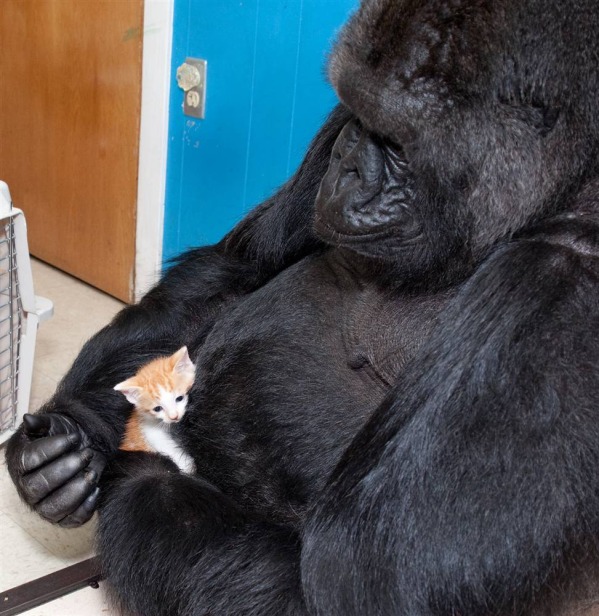 An animal photographer named Tanja Askani took these photographs of a wild deer playing with a rabbit in a forest in her native Germany. Talk about a real life Bambi and Thumper!

7. Kasi the cheetah and Mtani the labrador

Who said that (big) cats and dogs can’t be friends? Kasi the cheetah and her friend Mtani the labrador were raised together at Busch Gardens in Florida and are a huge hit with the parks many visitors each year.

They met when they were both three months old and Mtani lived with Kasi in the cheetah enclosure until he was two years old. Mtani now lives with a local family, but they still get to visit each other!

8. Manni the wild boar piglet and Candy the dog

After he was found starving in a field, Candy’s owners rescued Manni the wild boar piglet and the Jack Russell pub befriended him right away!

The pair love playing and running around the fields of rural Ehringhausen in Germany.

This bear, lion and tiger group- nicknamed BLT-  live together at Noah’s Ark sanctuary after being rescued from a drug dealer’s private menagerie. The sanctuary’s owners initially tried to separate the animals, but they wanted to stay together!

This unlikely and adorable pair were spotted playing together on the shore of Lake Van in Turkey. Let’s hope their unusual friendship helps the lost cat stay safe!

11. Milo the dachshund and Bonedigger the lion.

This huge lion and tiny dog have been best friends ever since the lion was a cub. Bonedigger arrived at the Garold Wayne Interactive Zoological Park in Oklahoma with a bone disease that made it hard for him to walk, so the zoo’s entertainment director took him home and raised him with a litter of dachshund puppies, including Milo.

The adorable pair now spend their days together in Bonedigger’s enclosure and nothing can keep them apart.

12. Mabel the hen and her puppies.

After being injured by a horse at her farm in Shrewsbury, UK, Mabel’s owners brought her inside and treated her as a family pet. She repaid them by adopting their litter of puppies! She keeps them warm while their mom sleeps outside.

13. Dennis the duckling and Fred the labrador

Dennis the baby duck would have died in the wild if he hadn’t been found by Fred the labrador. The duckling’s mom was killed by a fox and the friendly labrador found Dennis while he was out for a walk.

Fred immediately took a shine to Dennis and the pair now live together at Mountfitchet Castle in the UK.

14. Torque the dog and Shrek the owl

Shrek was taken from her mother at the Ringwood Raptor Centre in the New Forest, UK as keepers were worried her mother would end up harming her. Head falconer John took her home and she was immediately adopted by his greyhound, Torque.

When Shrek goes back to the bird center for visits, her adopted dad Torque goes with her and they sit together on the grass.

15. Tinni the dog and Sniffer the red fox

Sniffer and Tinni both live in Norway. Tinni encountered the wild fox while playing in the forest and the two animals immediately hit it off, like a real life version of the Disney film The Fox And The Hound.

16. Bea the giraffe and Mabel the ostrich

Bea- a three year old giraffe- and Mabel – a ten year old ostrich, have forged an unlikely friendship at Busch Gardens zoological theme park in Tampa, FL. The pair share an enclosure and couldn’t be happier together- despite the height difference!

17. Bubbles the elephant and Bea the black labrador

Bubbles and Bea live together at Myrtle Beach Safari in North Carolina. Bubbles was adopted by the safari in 1983. In 2007, a contractor hired to build Bubbles a swimming pool abandoned puppy Bella at the park and Bubbles took a shine to her new canine companion.

They love playing in Bella’s pool together!

18. Themba the elephant and Albert the sheep

Orphaned baby elephant Themba was depressed and unable to feed herself when she arrived at the Shamwari Game Reserve in Africa’s Eastern Cape, but all that changed when a local farmed donated Albert the Merino Sheep to keep her company. Baby Themba needed 24 hour companionship, and Albert was happy to look after him. 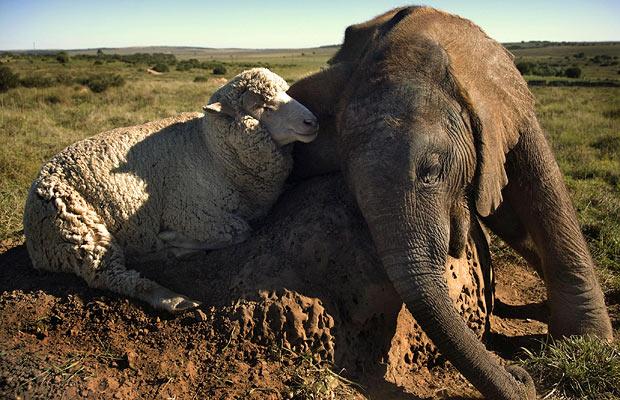 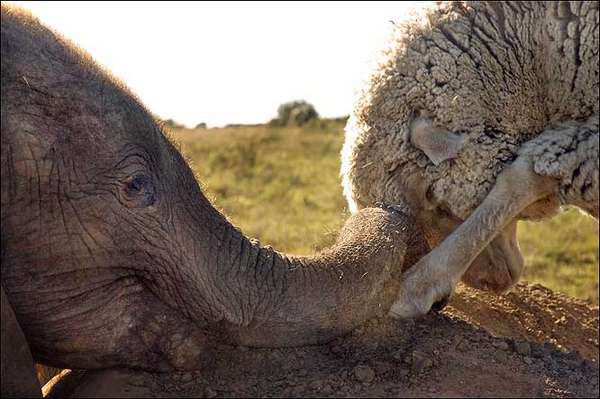 If these affectionate animals have touched your heart, why not share their stories and photos with a friend? 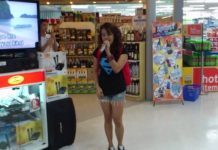 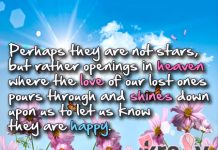 From Heaven They Shine 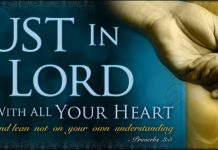